As smartphone technologies continue to evolve, our reliance on these mobile devices continues to grow. In the new normal, our smartphones are our best friends. Everything from getting important work done to staying connected with our loved ones is made possible, thanks to our smartphones. If you’re looking to upgrade or buy a new phone, Flipkart is holding its massive Big Billion Days sale from October 16 this year. The sale will kick off early at 12pm on October 15 for Flipkart Plus members.

Ahead of its Big Billion Days sale, Flipkart conducted a consumer survey involving more than 2.15 lakh respondents who own a mobile phone across all major brands, and at different price points. Flipkart says 85 percent of those who participated in the survey were less than 35 years of age.

The survey aimed at finding out what customers want in their next smartphone, especially after the COVID-19 outbreak in India. Today, we’ll tell you everything Flipkart discovered during its survey.

What do people want in their next smartphone?

Nearly half the respondents said that a smartphone processor was the primary feature on their mind while selecting a new smartphone. Camera and battery come next for these respondents. In choosing a processor, prospective customers look for smartphones with Snapdragon, MediaTek, and Exynos chipsets.

Those who are looking for a smartphone in the range of Rs. 10,000 to Rs. 20,000, wish for a higher megapixel camera. In this segment, consumers desire a 64-megapixel camera phone. Best buys in this mid range segment are realme 7 series, Samsung Galaxy F41, Motorola One Fusion+ and POCO X3 packed with a 64-megapixel primary camera sensor.

For those willing to spend over Rs. 20,000, high-end features such as optical image stabilization (OIS) and hybrid zoom are essential. In this segment, consumers can pick from Google Pixel 4a with an Astrophotography mode, realme X3 SuperZoom with a 60x zoom, vivo X50 Pro being the first with Gimbal Stabilization technology, and Samsung Galaxy S20 Ultra or the Motorola Edge+ with unbelievable 108MP camera.

After processor and camera, consumers look for battery as the next big feature in their next smartphone. 56 percent of the respondents said they’d prefer a larger battery with support for fast charging. Most consumers want a smartphone battery in the 5,000-6,000mAh range.

A majority of customers looking to buy a phone under Rs. 20,000 wish for a bigger battery even if it comes with an average charging speed while premium phone buyers prefer fast-charging phones with smaller batteries. Consumers are interested in phones under Rs. 7,000 said that a battery is the most important feature for them while picking a new phone.

For those eyeing a phone above Rs. 20,000, with fast charging, Asus ROG Phone 3, Realme X3 SuperZoom, iQOO 3 are phones not to be missed.

Next, comes the display feature. Flipkart’s survey has revealed that 61 percent of prospective customers prefer a screen size between 6-6.5-inch. Some popular phones within this range include realme C12, realme 7 Pro, Samsung Galaxy F41, and iPhone XR. For those looking at different display technologies, 68 percent want an AMOLED display with any refresh rate instead of an LCD. Flipkart sells a number of popular phones with an sAMOLED display including Samsung Galaxy F41, realme 7 Pro, iQOO 3, Samsung Galaxy Note 10+, and the Asus ROG Phone 3. 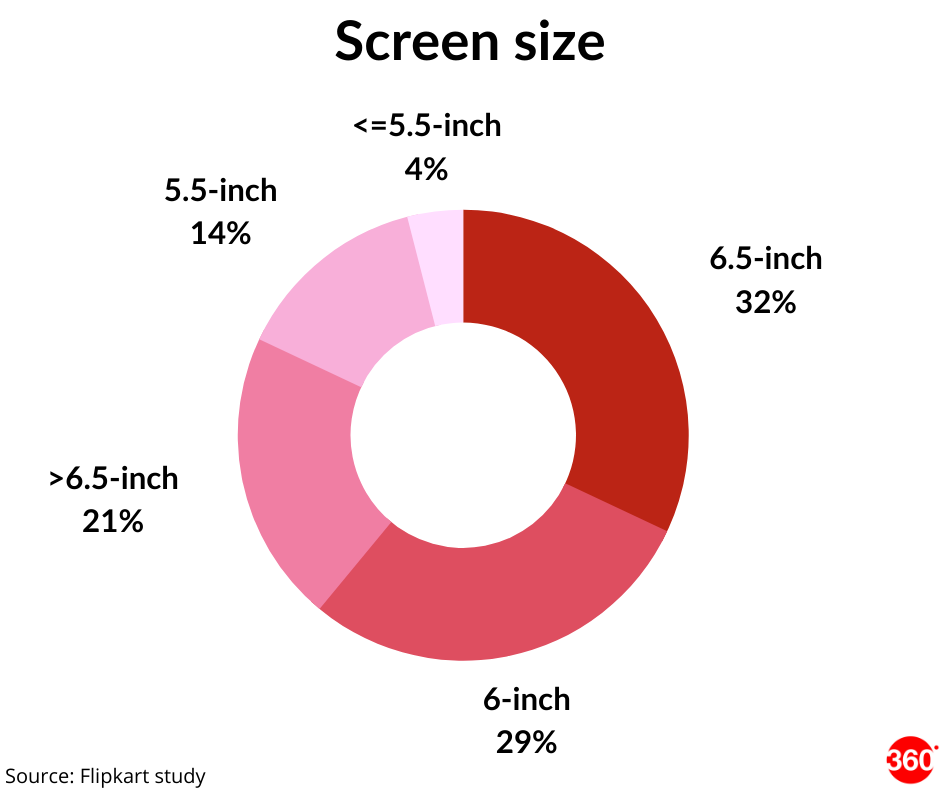 However, 44 percent of customers wish for a higher screen refresh rate for a lag-free gaming experience. Flipkart offers Asus’ ROG Phone 3, POCO M2 Pro, and the realme 7 for such customers.

Some of the top picks across all price points in the Flipkart survey:

realme C15
realme C15 comes with a large 6.52-inch HD+ display that’s great for watching videos or playing popular mobile games when you’re on the move. It also comes with a massive 6,000mAh battery, and the phone is powered by the MediaTek Helio G65 SoC.

Poco M2
Poco M2 comes with a big 6.53-inch HD+ display, and is powered by the MediaTek Helio G80 SoC. The phone features a quad rear camera setup, and a large 5,000mAh battery that’s perfect for a full day’s worth of usage.

Samsung Galaxy F41
Samsung Galaxy F41 is the company’s first phone in its brand new F-series in India. The new phone comes with an sAMOLED display, a triple rear camera setup, and a massive 6,000mAh battery. The phone is powered by Samsung’s Exynos 9611 SoC.

iPhone SE
Apple’s iPhone SE (2020) is perfect if you want an iOS device with a smaller form factor. It comes with a 4.7-inch Retina Display and a single 12-megapixel rear camera. The phone is powered by Apple’s A13 Bionic chipset.

Google Pixel 4a
Google’s new Pixl 4a is finally available in India. The phone comes with stock Android, and is powered by Snapdragon 730G.

Asus ROG Phone 3
Asus ROG Phone 3 is a gaming smartphone woth a massive 6,000mAh battery that’s perfect for an all-day gaming session. It comes with a 6.59-inch full-HD+ display and is powered by the Qualcomm Snapdragon 865+ SoC that ensures you’re able to play all your favourite mobile games.

Samsung Galaxy S20+
Samsung Galaxy S20+ is a flagship smartphone with quad rear cameras, and a massive 6.7-inch quad-HD+ display. The phone also comes with an all-day battery life and is powered by Samsung’s Exynos 990 SoC.

If you’re looking to buy a new smartphone this festive season, do check out Flipkart’s Big Billion Days sale that kicks off from October 16 this year. The sale will include great deals and bundled offers on popular smartphones and top electronics. For a sneak peek, click here.

Tags: flipkart survey reveals what people want in their next smartphone mobiles