Spoilers ahead for Mafia: Definitive Edition

At the very end of Mafia: Definitive Edition — 2K-owned developer Hangar 13’s remake of the 2002 critically-acclaimed original — the cabbie-turned-mobster protagonist Thomas “Tommy” Angelo (Andrew Bongiorno) notes that family is everything. On his deathbed, Tommy is at peace, for his family’s safety and financial future are secure, even as he might have spent most of his married life chasing fellow mobsters or in jail to ensure that outcome. But the ending’s familial focus feels out of place because Tommy’s family have essentially been ignored until that point. His wife Sarah (Bella Popa) is an afterthought and the daughter doesn’t even have a name. Those are glaring omissions, and emblematic of its fumbles across the board.

It’s a shame too, for the story is (still) by far the best part of Mafia: Definitive Edition, as it was nearly two decades ago. And it’s been improved upon on nearly every front. Even though he’s working with a plot that’s inspired by dozens of mafia movies — Goodfellas and The Godfather among them — and lacking in originality or humour, writer-director Haden Blackman (Star Wars: The Force Unleashed) lifts it on a scene-by-scene level, with richer dialogue and performances. And a new cast — well chosen for their acting abilities and vocal authenticity — infuse life into the characters that inhabit Mafia: Definitive Edition, while massively benefiting from the technological progress made in the video gaming arena in regards to facial capture since 2002.

Mafia: Definitive Edition also adds to that with the most easily overlooked of things: radio. Set during the Great Depression of the 1930s, the game takes place during an era when economic collapse has cast a long shadow on American life. US Presidents Herbert Hoover and Franklin D. Roosevelt are trying to offer words of encouragement, there are proclamations from the mayor, councillor, and police chief about rising crime in the waning days of the Prohibition, while the news brings word of Hitler and the Nazis’ rise across the pond in Europe.

Culturally, the ‘30s were a time of great experimentation in the US as well. Swing jazz (Duke Ellington, Cab Calloway, and Django Reinhardt are on the new licensed soundtrack) stitches together those announcements. The radio is critical to fleshing out the world of Mafia: Definitive Edition, so much so that the game had a dedicated “radio writer” in Matthew Aitken. And it’s further fleshed out by a wonderful new soundtrack from composer Jesse Harlin (who deploys the full orchestra and sneaks in mandolin and the cimbalom), which infuses gravitas into the story.

And it all looks great too, as it should. The fictional city of Lost Heaven borrows from Chicago, New York, and San Francisco of the 1930s, which means a motley of bridges, trams, muscle cars, zeppelins in the air, and neighbourhoods divided by rivers. It’s a bit flat during daytime save for the pop of colourful vehicles, but it’s lit up (literally) at night thanks to neon signs and billboards. And it’s now available in 4K HDR (on PC, PS4 Pro, and Xbox One X) though the textures and character models feel like upscaled 1080p outside of cutscenes. They don’t have enough detail, suffer from aliasing when it comes to advanced water effects, and have artefact troubles. Still, Mafia: Definitive Edition delivers a visual upgrade over Mafia that is like night and day, and it’s begging for a photo mode, which is unfortunately one place the game falls short.

But there are bigger problems than the lack of a photo mode. For all the beauty and nostalgia of ‘30s America offered by Lost Heaven, it’s just a pretty front. Unlike open world games of today, Mafia: Definitive Edition is a linear game that pushes you from one story mission to the next. Sure, you’ve a lot of collectibles to pick up on your way in pulp magazines, comic books, and cigarette cards, but there are no side missions, frivolous activities, or non-story characters to meet. Lost Heaven might look like a living, breathing city at first, especially as the opening sequence sweeps you through the streets and introduces you to its many neighbourhoods, but it all feels like one giant film set once you actually start to explore.

Like the original game, Mafia: Definitive Edition spins off free roam into its own mode: “Free Ride” — there aren’t two versions of Free Ride unlike in the original. If you’d like to murder innocent citizens and rack up crazy police chases, you have to quit the story mode and go back to the main menu first. Keeping that awkward transfer system is rather in keeping with the sensibilities of the narrative, as Tommy isn’t in a line of work that intentionally invites attention. It made me think of Black Mirror creator Charlie Brooker, who once noted how “random” open world games can be. On Mafia: Definitive Edition, it has the added benefit of good pacing. By focusing on the main story through and through, it doesn’t slow things down and keeps you engaged.

Mafia: Definitive Edition is essentially one giant flashback as Tommy recounts his rise in the mafia to Detective Norman (Dameon J. Clarke), because he needs protection for his family. It’s an underdog story in parts, as Tommy’s boss Don Salieri (Glenn Taranto) doesn’t wield the level of influence carried by his rival Don Morello (Saul Stein). And naturally, it’s also about what the mafia life does to you, as you lie to your loved ones, constantly live in fear, and question the loyalty of everyone around you. But there’s a lot about the mafioso life that the game doesn’t give us. It doesn’t show the extravagances like Goodfellas. More importantly, it never unpacks the layers that make up Tommy, and resorts to throwaway references that don’t stick. Despite being the lead, he feels like a cardboard character.

Like the narrative, the missions in Mafia: Definitive Edition lack the variety offered by open world games today, though it’s partly made up for by the visual variety it offers. Hangar 13 has tried to improve upon the combat mechanics too, with the introduction of a cover system and melee combat, but it’s again neither here nor there. Melee combat is a joke, as it’s essentially a game of dodging or countering a blow and then repeatedly hitting the attack button until you activate a mini-cutscene where Tommy finishes the opponent off.

Gunplay is relatively better. Enemies will try to flank you or move closer for a killing blow and will fling a Molotov cocktail or grenade that will force you to move. But not always. Their numbers are also believable. Movement isn’t very natural though and it can be frustrating to be caught in the line of fire or discovered during a stealth mission, when Mafia: Definitive Edition doesn’t respond as you expect it to. And on certain occasions, bullets seemed to go through walls and enemies. It’s not a case of bullet sponges though, rest assured.

Hangar 13 has also introduced new elements to driving on Mafia: Definitive Edition as well. There are motorcycles you can ride now, for instance. And then there’s a “ram” button that gives you a tiny acceleration boost and better car handling, to help you knock chasing vehicles into oncoming cars, lampposts, and buildings. And when you’ve guided navigation turned on, Mafia: Definitive Edition will temporarily display sign posts on street corners to tell you what direction you need to take, helping you keep your eye on the road, rather than glancing at the mini-map. 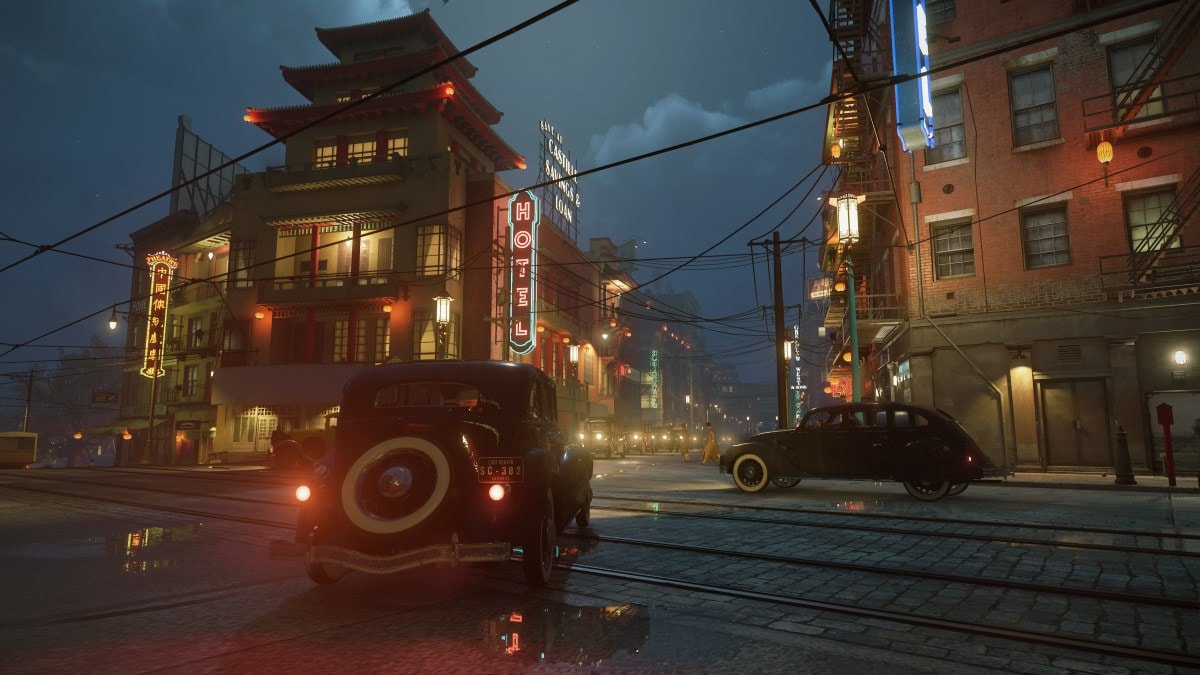 There is selective damage, as with the original Mafia game. After banging the front of our car one too many times, we lost all acceleration. Of course, driving is a challenge in itself anyway, since you’re working with old, over-heavy cars that tend to behave erratically and don’t go around corners very easily. Weirdly, there’s no handbrake button to help you slide through them. You can further amp up driving difficulty by switching to simulation handling, and then compound that by shifting to manual transmission.

Mafia: Definitive Edition has four preset difficulty options: “Easy”, “Medium”, “Hard” and “Classic”. The last of them is new and essentially cranks everything to the maximum. Your health depletes much quicker as you take damage, as does your vehicle, and you regain less of it when you use first aid kits. Your opponents are stronger, smarter and aren’t visible on the mini-map. The police responds not only to bodily harm, but even regular infractions such as speeding, vehicle collisions, and jumping red lights. And if you reload a weapon with bullets still left in the clip, you lose them all.

Ultimately, this is a game designed around the campaign that lasts around a dozen hours, and you’re unlikely to spend much more time in Mafia: Definitive Edition, as there’s little to do of significance or anything appealing that will make you want to dive back in. But much more annoyingly, it’s half-baked in every respect. The updated story is handled better but still suffers from some glaring gaps. The improved visuals aren’t up to 2020 standards — and oh, they are just a façade. There are new combat mechanics but they don’t do enough to lift the shooting bits. Mafia: Definitive Edition is crying out for a stronger hand at the wheel and a deeper rethink, for in its current state, it’s oblivious of the fact that it’s been 18 years since the original.

That’s a long time for any piece of entertainment, more so in video gaming, and Mafia: Definitive Edition is a long way from what it needed to be.

Will Xbox Series S, PS5 Digital Edition fail in India? We discussed this on Orbital, our weekly technology podcast, which you can subscribe to via Apple Podcasts, Google Podcasts, or RSS, download the episode, or just hit the play button below.