Timeless Mahindra: Adil Jal Darukhanawala on the history of the iconic jeep and how it is intertwined with a free India’s – Living News , Firstpost

The 75-year journey of Mahindra & Mahindra, that started off with the hardy jeep CJ-2A,is traced by Darukhanawala in his new book.

During his years growing up in Solapur, Adil Jal Darukhanawala remembers a few family friends visiting them in their respective jeeps. While the elders got chatty indoors, the kids had a field day, hopping in and out of these fascinating vehicles that had no doors to keep them out, setting off on their own make-believe adventures behind the steering wheel.

As he embarked on his career as an automobile journalist 44 years ago, there were a number of occasions when he yet again gazed spellbound, admiring the wonders of the machine that was being manufactured by Mahindra & Mahindra Limited (Mahindras) in India. The 75-year journey of the company that started off with the hardy Jeep CJ-2A is what Darukhanawala captures in the book, Timeless Mahindra.

“The jeep is a jack of all trades and master of many. There is no other vehicle that can do all of the things that a jeep can,” Darukhanawala says.

The jeep was lapped up by every sector — from the defence forces and police units to rural transportation services in the hinterland. All images excerpted from ‘Timeless Mahindra’ courtesy Adil Jal Darukhanawala Willys Jeeps being assembled at the Mahindra & Mahindra plant, 1955.

The origins of the jeep go back to World War II, when the US realised the need for a robust vehicle to serve them at the frontline. Willys-Overland became the primary manufacturer, producing 6.4 lakh vehicles between 1941 and 1945. As part of the Lend Lease programme initiated by the US government, the first of 2,000 jeeps arrived in the Indian subcontinent in Rangoon (now Yangon) to play their part in the Burma theatre and were soon deployed in the rugged terrain of Northeast India. The ability to carve out its own roads was evident and it was vital in securing the region against the advancing Japanese forces.

“It had a very simple construction and didn’t require much investment. That is one of the main reasons why it won the war,” Darukhanawala says.

A few months after the conclusion of the war, two gentlemen, KC Mahindra (KC) and Ghulam Malik Mohammed laid the foundation of Mahindra & Mohammed Limited in October 1945. The surplus jeeps were left behind, given the cost of transporting them back to the US and they were soon offered to Indian buyers who could afford them. The Mahindras, however, decided to begin their own assembly line after collaborating with Willys-Overland.

The need for motorised transport was evident, given the circumstances in an independent nation. Mahindra & Mahindra started operations in Mazagaon near the port in Bombay (now Mumbai) and on 3 June 1949, rolled out the first of the Willys Jeep CJ-2A.

“We had no roads at the time or the money to make any. The jeep was a very simple machine and could go anywhere, which made it suitable for public transport. From the perspective of nation building, the Mahindras did a lot of things that were best suited for the post-Independence period,” he says. 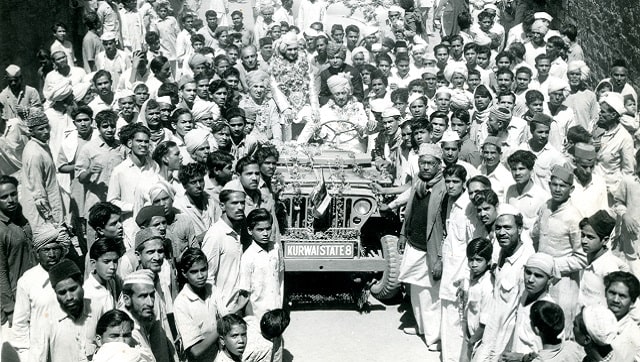 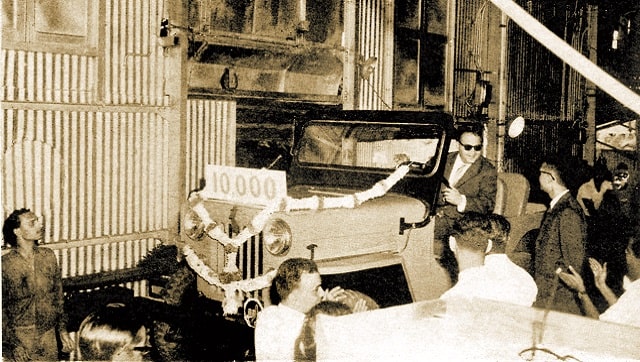 The Mahindra & Mahindra chairman drives the 10,000th jeep off the assembly line

Once Mohammed shifted base to Pakistan after Partition, the firm was rechristened Mahindra & Mahindra Limited. Despite the regulations put in place by the new government — a cap on the number of vehicles manufactured each year and the pricing were just some of them — the company looked at the long-term future. They started investing in setting up facilities across Bombay, while also diversifying into tractors and trailers, and other businesses.

The CJ-2A made way for the CJ-3A and CJ-3B models, the latter being the first truly ‘Indian’ Jeep that was lapped up by every sector — from the defence forces and police units to rural transportation services in the hinterland.

“What Mahindras did with the basic CJ-3B model is absolutely admirable, given the circumstances at the time in India. And that platform in its essence and makeup has served the company as far as 2007-08 with the Mahindra Major,” Darukhanawala says. With the units spread across Bombay proving to be a logistical nightmare, there was a realisation of the necessity to have one major facility that could handle all the needs of the company. In 1962, they finally set up base across 137 acres in Kandivali, which continues to be an important cog in their production story even today. From 1,175 vehicles in 1953, the production jumped to 21,660 in three decades after the market gradually started opening up, with the jeep also catering to foreign markets such as Africa, the Middle East and Southeast Asia. An impending rise in the cost of petrol after the 1971 war with Pakistan led Mahindras to start work on their own diesel engines, which continue to power their vehicles even today.

“The basic jeep chassis was more or less the same — it was only lengthened, widened or shortened in subsequent models. The Hurricane engine, transmission and everything from the wheels to the joints remained virtually the same until the ‘90s. So there is a big ecosystem in place which makes spares still available, which is why you see them flourishing in rural India even today,” he says.

The Mahindra Jeeps continued to play an important part in the wars fought since Independence. If those exploits weren’t enough, it attained cult status after it featured in Bollywood hits such as Haqeeqat and Aradhana. Its reliability was further established after jeeps started dominating car rallies in the early ‘80s. There on, its growing legend brought evolved models like the CJ340, the Commander series, the Armada and the Classic to urban markets. While the Bolero changed the fortunes of Mahindra in the rural setting, the Thar in 2010 birthed a new generation of adventurers in towns and cities across India — a tribe that continues to grow each day. 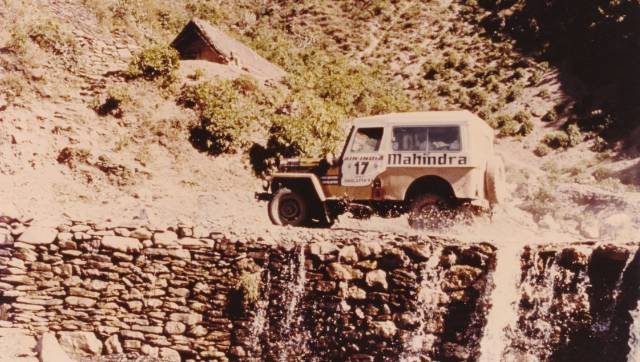 Adil in a Mahindra jeep

“Over time, there was more exposure to foreign cars and bikes in the country, which led individuals to aspire to not just commuters, but also off-roaders like the Thar. Enthusiasts started yearning for more and a growing crop of talent within the company started working towards making it accessible to them,” Darukhanawala observes.

His book is dotted with gems such as how the jeep was christened, detailed insights into the growth of Mahindra and its favourite baby, nostalgic tales from the many wars and rallies, and fascinating photos that reveal the journey of an attested workhorse that continues to blossom amid aficionados. However, through all the years, Darukhanawala has never had the opportunity to own a jeep. All that is set to change in the months ahead, given that two years ago he acquired a 1952 CJ-2A that is currently under restoration, and awaits the delivery of the recently launched Thar next year.

“Both have their own charms, one a vintage and the other a daily runner that offers comfort. I’m virtually straddling across the lineage — where it all started off and the absolute modern version of the same. But my bigger headache in the time ahead is going to find parking space in my driveway,” Darukhanawala says, chuckling.

Redefining supply chain management in MSMEs: What to digitise and how to

Redefining supply chain management in MSMEs: What to digitise and how to